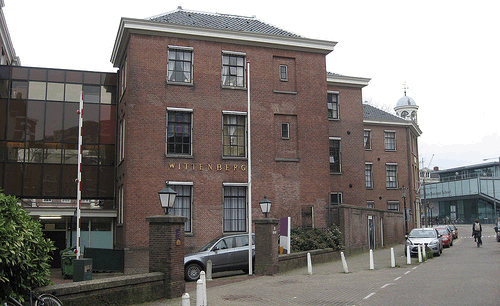 The Council of State recently made a decision in a case of principle on the question whether a nursing home can be considered a home. M2 Lawyers litigated on behalf of the owner and brought the case to a successful conclusion.

What was the case about?

The case was about the former Wittenberg nursing home in Amsterdam. The building is a national monument that was built in 1772 as a Luther’s Diaconie en Besteedelingenhuis (Luther’s Diaconate and Orphanage), intended for the accommodation and care of 40 orphans and 400 elderly men and women who could not provide for themselves. After the last orphans left in 1884, the building continued to serve as a hospital and retirement home for chronically ill and mentally disturbed elderly. From 1964 the building was used as a nursing home.

Marius Rijntjes and Ginio Beij acted on behalf of M2 Advocaten for the Diaconie who wants to realize short stay apartments in the building. The municipality was of the opinion that a residence permit was required for this, because the nursing home would have been lived in within the meaning of the Housing Act. The Diaconate did not think so.

What were the arguments?

One of the arguments put forward by the municipality was that the persons residing in the Wittenberg nursing home were registered there and resided permanently. According to the municipality, the fact that care was provided does not detract from the residential character.

M2 Advocaten argued among other things that care was the dominant element and that the two and four-person rooms in nursing home Wittenberg were geared to the provision of intensive care and not to running a household within the meaning of the Housing Act.

In order to be able to submit the dispute to the court, the Diaconate applied for a housing withdrawal permit. This was rejected, after which the parties skipped the objection phase and submitted the matter directly to the court.

The District Court was of the opinion that the municipality was right to state that the Wittenberg nursing home had been used as residential accommodation. According to the Court, these were private rooms – because the beds in nursing home Wittenberg could be screened off with a curtain – that were occupied by single-person households using communal facilities (shower, toilet, etc.). Furthermore, the Court took into account that admission to a nursing home such as De Wittenberg generally means that someone lives there permanently and receives care.

The Diaconate did not agree with this judgment and lodged an appeal with the Administrative Jurisdiction Division of the Council of State. In these proceedings M2 Advocaten argued, among other things, that the beds in nursing home Wittenberg cannot be seen as confined spaces – they are not enclosed by walls – that can be inhabited by a household.

What was the outcome?

Furthermore, the Division has ruled that a bed screened off by a curtain cannot be regarded as confined space. Although a curtain does offer some privacy by blocking the view, it does not close off a room in such a way that it can be occupied by a household according to common speech, according to the Division.

Indexing rent afterwards, is that okay?