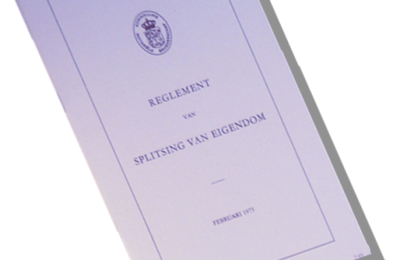 Owners are protected as third parties in good faith after they bought a property. They can invoke this protection against the person who should have known about the error but did not ensure that the registers corresponded to reality (i.e. registration of a deed with the correct content). This was recently the case in a Supreme Court case. It concerned the following case.

The division of an apartment complex, consisting of houses and shops, had been declared subject to the model regulations of 1973. As an exception to this, the deed of division stipulated that the costs for the communal areas of the residences were to be borne solely by the owners of the residences.

Following an amendment to the deed of subdivision in 1994, this exception was (inadvertently) no longer included. In subsequent years, however, the costs of communal areas were borne by the owners of the dwellings. In 2009, the new VVE administrator discovered that this did not correspond to the amended deed of subdivision of 1994.

The law provides that third parties enjoy protection in good faith against incorrectly recorded facts. This protection can be invoked against the person who could reasonably have ensured that the registers corresponded to reality. According to the Supreme Court, this means that the protection can also be invoked against the person (does not know but) who should have known the inaccuracy of the fact recorded by himself, but failed to ensure that the registers corresponded to reality.

In this case, the deed of division had been amended on the initiative of the shop-owner, whereby the shop-owner was provided with notarial and legal advice. Under these circumstances, the shop-owner could reasonably have ensured at the time that a deed with the correct content was registered, according to the Supreme Court. That did not happen.

Moreover, the later owners had no reason to doubt the legal validity of the 1994 deed. They could rely on the correctness of that deed. According to the Supreme Court, the fact that the ‘old’ cost system was used for many years after 1994 does not make this any different.

The conclusion is therefore that homeowners are protected against the error in the demerger deed. Whether or not the shop-owner actually has to contribute to the costs for the communal areas of the residential area remains to be seen. The shop-owner had appealed to the Court of Appeals in that respect – which the Court of Appeal had ignored – and this will still have to be investigated.

For apartment owners it is good to know that they, as third parties, are protected in good faith against inaccuracies in the demerger deed and that they may rely on the correctness of the deed.